What I love about @inSTREAMLY that made me make a call to invest? Perfect founding team, ability to bootstrap till… https://t.co/go4zj1mbAu [link]

As some of you know, I’ve been organizing tech meetups called OpenReaktor in the Warsaw-based startup mansion I co-founded since June 2011. It’s already become a tradition that in December I’m listing the top 5 talks of the year. 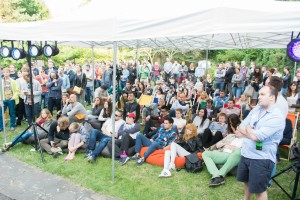 Many great talks did not make the list this year, including a talk by Girls Code Fun about teaching children how to code, Chris Squire’s introduction to advertising tech, or Paul Bragiel’s story about fulfilling his business and personal dreams (including getting a Columbian citizenship and participating in the Olympics). You’re welcome to add those to the watchlist while now I’d like to introduce you to the top 5 talks of 2015. Enjoy!

5. Geek Girls Carrots: Community of Women in IT. How It All Started – Kamila Sidor

An inspiring story of building Geek Girls Carrots, one of world’s biggest communities attracting women to IT, from Warsaw, Poland. It’s especially interesting to hear about the massive role of PR in community’s growth. Tea with Duchess of Luxembourg matters, too.

Entrepreneur First is a startup accelerator that is one of its kind. It only supports technical co-founders and funds them to work on “hard projects” for 3 months. Its success is bad news for London-based MBAs. Hear about their philosophy and why they believe taking technical risk is actually good for startups.

3. Tech Entrepreneurship Is More Important Than You May Think – Bartek Gola

Founder of Poznan-based SpeedUp VC Group discusses the importance of tech startups and what needs to be done in Poland and other CEE countries to avoid becoming the “Mexico” of Western Europe.

2. How Polish Startups Can Succeed in Silicon Valley – Marvin Liao

One of the partners at 500 Startups in an honest and disturbing talk calls Polish founders lazy and urges them to hustle more. Watch Marvin if you’ve ever wondered about what is necessary to succeed in Silicon Valley being a Polish or European startup.

One of the few 500 Startups graduates from Poland, founder of Growbots, explains in detail what he did right in order to get traction in the US before even building a SaaS product and how being a Polish founder influenced his decisions to join the accelerator and run his business on two continents.

I mentioned before that this year was the best so far as long as presentation quality is concerned. That’s why I’d like to recommend you one more “bonus track” – the talk of Jeff Burton, one of the co-founders of Electronic Arts, who visited us at Reaktor in December.

Want to be the first to see the latest OpenReaktor videos? Come to our next event or subscribe to the OpenReaktor channel on Vimeo!